Take a look at the SSA Drama website, ssadrama.com

Formed in 1944 as one of the original three sections of the Solihull Society of Arts, the Drama Section has been performing ever since! Recent productions include Aladdin, The Wind in the Willows, Lord of the Flies, The Ladykillers, Romeo and Juliet and the amateur premiere of Jerusalem.

We are always on the look out for new members, so whether you’re an actor, director, lighting designer, stage manager or just general theatre enthusiast, please get in touch.

3 – 6 Dec – Peter Pan or The Boy Who Would Not Grow Up, directed by Chris Cooper
5 – 9 Aug – A Midsummer Night’s Dream, directed by Thom Faulkner & Bethany Hughes
15 – 18 Jan – Sleepy Beauty, directed by Sarah Jones 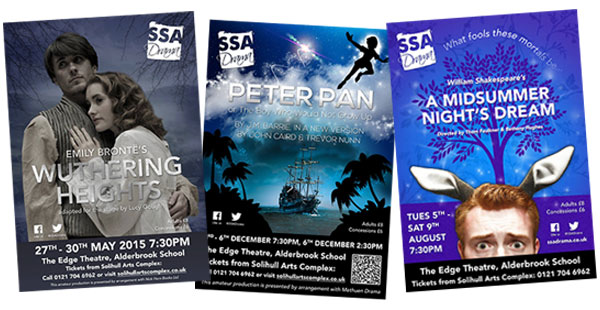