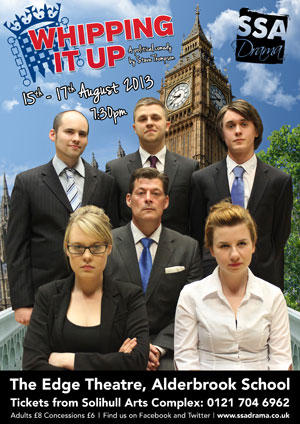 SSA Drama are currently rehearing the hilarious political comedy, Whipping It Up, by Steve Thompson.

This production will play from Thursday 15th – Saturday 17th August 2013 at 7:30pm at The Edge, Alderbrook School.

Tickets are now on sale!

“Everything they say is true, then? Black ties; cigar smoke; whisky in cutglass. Westminster runs the country. But the Whips run Westminster.”

It’s a week before Christmas, and the new Tory government is facing dissent over its latest Bill. With a majority of only three, the Whips’ office is out in full force, and they’ll stop at nothing to keep the strays in line. But they’re in for a long night: boy scouts are rioting in Whitehall, the PM’s golfing with the President, five Tory rebels are on the loose and the Chief Whip’s playing at Santa – could this be the beginnings of a leadership challenge?